I was so excited that I was going to be in New York to see the revival/reinterpretation of Bare, which opened tonight off-Broadway at New World Stages. I basically browbeat my friend into seeing it with me. I wanted her to see it. I wanted everyone to see it because the previous incarnation completely mesmerized me. I was not mesmerized this time out. Not in the slightest. 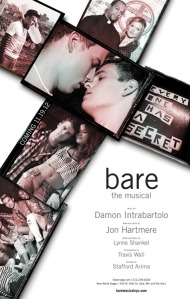 Bare was written a little more than a decade ago with its book and lyrics by Jon Hartmere and music by Damon Intrabartolo. It was originally billed as a “pop opera” and, while powerful and beautiful, if the truth be told, it’s always been a problem piece.

Set in a co-ed Catholic boarding school, it deals with the love affair between Peter, a more introverted would-be actor, and Jason, the jock who has all of the female heads on campus turning. That’s basically all that’s the same this time around. There’s still a production of Romeo and Juliet, but in previous incarnations, the action tracked the action in R&J; this time it’s basically little more than background noise.

Jason Hite as Jason, left, and Taylor Trensch as Peter are the central performers in the new production of Bare.

But let’s get this out of the way: the problem is not with the actors. In fact, Jason Hite as Jason and Taylor Trensch as Peter are acting their hearts out — they are lovely performers — and Barrett Wilbert Weed as Jason’s drug-peddling sister Nadia was also quite good. At the preview performance I saw, however, Gerard Canonico as straight friend Matt, in love with Nadia’s roommate Ivy, was the standout.

Being in a Catholic school, there are requisite nun and priest characters and they are also new this time around. Father Mike (Jerold E. Solomon) was completely inconsequential and the sublime Missi Pyle was utterly underused as Sister Joan.

From what I understand, director Stafford Arima and book writer Hartmere wanted to reinterpret Bare for today’s youth. Composer Intrabartolo did not take part. There are a few — a very few — introductions that really make sense, like cell phones and social media, but other than that and the Instagrams covering the set, most fall flat.

And here’s why: Bare feels neutered. It feels like the remnants of something big and powerful. There was a chance to really say something; to really stand up and say why it is unacceptable in 2012 that high school students are afraid to come out, afraid to be themselves, afraid to confront their Church or their parents, and that is further unacceptable to allow them to commit suicide as Jason does.

Barrett Wilbert Weed and Gerard Canonico as Nadia and Matt, two of the standout principals in this deeply flawed reinvention.

In fact, why not lay this square at the Catholic Church’s door? It seems like that’s the argument that’s being made, that homosexuality nor bullying killed Jason but that the Church did. That the Church is responsible. Why not say that? Why not take a bloody stand? Make the argument. Create some drama.

AND, why did it seem like every new number was a power ballad? I just wanted to stand up and say, “Stop! Enough! Write something else!”

The whole production seems like a cop-out. It seems like a good idea that got castrated by the producers. Maybe that’s not the case — maybe the reinventors were simply not as good as they thought they were.

For my part, I’m passionate about doing whatever we can to prevent this incessant tide of gay teen suicides from continuing into another generation. When Jason dies in this play, there shouldn’t be a dry eye in the house, but guess what? I didn’t feel a thing. That, I am afraid, is a ringing endorsement of failure. After all, earlier in the day, I’m the sap that cried at A Christmas Story, the Musical!

When we left the theatre, my friend and I had a heated discussion about the show all the way back to our hotel. She and I are both playwrights and I’ve been to more theatre with her in the last 20 years than with anyone else. At one point she grabbed my arm and stopped me. “We could fix this one, me and you,” she said. “Yes,” I agreed, “it would just take some balls.”