The cut below is from a pretty good interview done by Laura Douglas-Brown for GA Voice. Goss is a particular favorite of mine. His live recordings feature lots of rambling interaction with the audience and it makes him come across as incredibly human and genuine. Also, he writes some lovely stuff. Click the photo for his website. 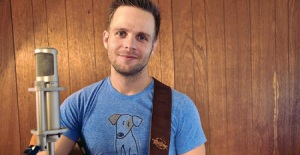 Years ago, Tom Goss planned to be a Catholic seminarian. Now he’s headed to Atlanta to help raise funds for a bunch of fake nuns.

An acoustic singer-songwriter known for both his music and his messages, Goss performs at Atlanta’s First Existentialist Congregation on Saturday, March 9, to benefit the Sisters of Perpetual Indulgence, the group of drag nuns dedicated to community service for LGBT people and beyond.

“I’ve met Sisters all over the country; I love their energy and their works,” Goss tells GA Voice.

And while Goss will join the Atlanta Sisters as performer rather than priest, he still packs powerful meanings into his music.

#tbt From the Waaaaayback Machine. Radio Daze. And LOTS of dark hair! Ahh, #youth! #1980s #radio #microphone #albums #vinyl #nogreyhair
Today would have been my dad’s 90th birthday - and my grandmother’s 113th. Here are a few snaps of them together and apart. That birthday bond made them particularly close, I suppose; he only outlived her by a year. It’s nearly a quarter-century since they’ve been gone but I think of them both all the time. The first photo is one of my favorites - Dad at work at his drafting table getting ready to create something. It is how I remember him.
You have to admit it’s pretty — even if it is 8 degrees. #winter #cold #cny #backyard #snow #ice
What he said.
#snow is too deep and my legs are too short. Gonna sleep like this all day. #bassetlife #bassethound #bassethoundsofinstagram #winter #hazel
#winter has finally arrived in #centralnewyork. #snow #syracuselife #weather #cny #syracuse #cold