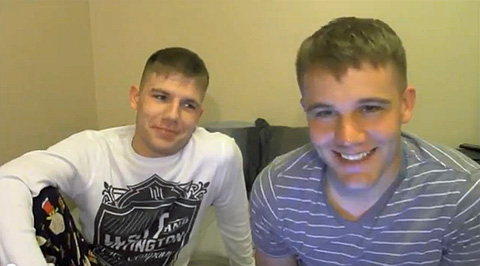 Jonathan Russell, right, “Your Favorite Gay Marine,” known as Russmarine2014 on YouTube, and his boyfriend, Matt, open up about their lives in a round of “Boyfriend Tag.” Image links to his YouTube channel.

I had already discovered “Russmarine2014” on YouTube before Towleroad and Huffington Post Gay Voices posted, but this piece deserves a reblog.

Why? Because it is the perfect example of how much the world has shifted since the repeal of Don’t Ask Don’t Tell on Sept. 30, 2011. That’s barely 18 months ago, if you’re keeping track.  Imagining a military — a Marine Corps — that allows gay men and women to flourish being who they are is almost unbelievable to this 48-year-old, who in a much, much younger guise carried, in the 1993 March on Washington for Gay Rights, a sign that said “Stop Discrimination: End the Military Ban.” What we got was DADT. It took nearly two more decades before we achieved real, honest-to-God equality.

What Russ is doing, by showing those outside of the military his life as an out Marine, by showing his audience straight Marine allies who are ambivalent about his sexuality, by talking about parents who are not as welcoming as he had, perhaps, hoped, he is educating all of us through sharing his experiences. It is a rich, potentially groundbreaking (however unwitting) example of “the new normal.” And he’s to be commended for it.

One thought on “Gay Marines Talk About Falling in Love”