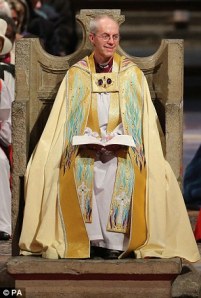 The new Archbishop of Canterbury, head of the Anglican Communion, was invested in  a ceremony with plenty of pomp and circumstance in Canterbury Cathedral in Kent this week, just two days after the new Pope was installed in Rome.

The Most Rev. Justin Welby made headlines in the UK by noting that many gay and lesbian couples have formed relationships of “stunning quality,” but he would not pledge to work to change the Church of England’s stance on same-sex marriage, though he did say that he thought that someday a woman would become Archbishop of Canterbury.

For all of his talk of inclusion for some, much of his rhetoric is as rooted in the dogma of the past as that of Pope Francis.