The Actor Who Is Changing How We See Asian Men On Television.

Sean has been making waves on daytime television as a spanner thrown in the works for Will Horton and Sonny Kiriakis, the first gay married couple on NBC’s Days of our Lives. Sean is a terrific actor and has terrific chemistry with both Freddie Smith and Guy Wilson, who play Will and Sonny. I think the introduction of Sean has reinvigorated the Will and Sonny storyline and has created an additional cheering section rooting for Sean and either of the guys, but especially Sonny. 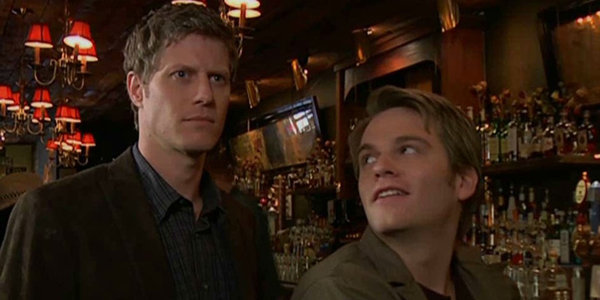 Eric Sheffer Stevens (l) joined As The World Turns in its last year on the air as Dr. Reid Oliver. His pairing with Van Hansis’ Luke divided audiences between those who wanted to see the electric pairing of Stevens and Hansis and those wanting a happy ending for Luke and his former love, Noah, played by Jake Silbermann. Reid Oliver’s death was central to the plot of the show’s finale, though it did not satisfy many viewers.

Something similar happened in the now-iconic Luke/Noah pairing on As The World Turns. When the writers introduced Eric Sheffer Stevens as Dr. Reid Oliver, his chemistry with Van Hansis as Luke Snyder was palpable and it upset the fandom applecart in quite unexpected ways. In fact, ATWT’s headwriter at the time, Jean Passanante, noted that if the show had not already been cancelled that the actors’ chemistry could have easily led the writers to create a longterm romantic triangle. By the time the show came to an end — in qintessential soapy fashion when Reid was killed by a train but lived long enough to make sure his heart was donated to save the life of Chris Hughes (don’t ya love it! LOL) — the Nuke (Noah and Luke) and the LuRe (Luke and Reid) camps were already being drawn up.

Christopher Sean as Paul Norita on Days of our Lives. Sean plays a former professional baseball player who is wreaking good-looking havoc in the relationship of iconic couple Will and Sonny. When Paul came out to his Japanese grandfather on air, he spoke to him only in Japanese.|Image: Macey J. Foronda/BuzzFeed

On Days, Sean’s recently out ex-pro baseball player Paul Norita, has already slept with Will, saved Sonny’s life and it looks like he’s about to be exposed as Will’s grandmother’s stepson! Oh, did I forget to mention he’s Sonny’s ex as well? It’s a lot of soapy froth and I get a kick out of it. Sean’s chemistry with Smith was noticeable from their first scenes and Team WilSon (Will and Sonny) and Team PaulSon (Paul and Sonny) are already getting their standards made.

I am a hardcore member of Team WilSon, but I do love what Sean brings to the table. He’s a great addition to the cast and I love that he’s moving the needle on bringing more hues to a too-white canvas. And, dammit all, he is NOT hard to look at either!