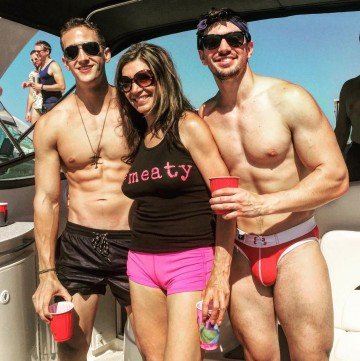 The Instagram shared ’round the world. If I looked this good in a swimsuit, I’d never wear clothes again. You might think that’s pithy; but it’s the truth, baby!! P.S. to Steve — Keep the scruff; it’s adorable! |Image: Steve Grand

It would be nice if any other aspect of my life/work as an artist/advocate got a fraction of the press I get for wearing a bathing suit by gay media.

Evidently, it was the photo that appears at left that was the cause of the flap. Grand posted it to his Instagram and some naysayers found it inappropriate. Or too revealing. Or too gay. Or something. Just too too.

Here’s what I have to say about that: Get the hell over yourselves. Why — WHY — must people continue to cut down others to feel better? Why do you care how much or how little of Steve Grand Steve Grand’s bathing suit covers? Are you that insecure? Are you afraid that you don’t look as good, so because you can, you will cut him down? Is it okay to do that somehow because he’s in the public eye so you think he’s fair game? Do you think it’s not good for “the cause” to have handsome men in personal photos wearing tiny little red swim trunks?

We have enough going against us as out gay men; we don’t need our own jabbing at us, too. It’s just as wrong to call out Steve Grand on his choice of clothing as it is to call out Caitlyn Jenner or Ellen DeGeneres or Neil Patrick Harris. It’s wrong to tell the trans kid they can’t use the bathroom for the gender of which they define themselves. It’s wrong to kick puppies, cheat on your taxes, lie to your spouse, be a racist, text while driving, or, quite frankly, fear that what someone else is wearing somehow reflects on or diminishes you. Because it doesn’t. So just stop it.

I encourage you read the rest of Grand’s Facebook post. He’s a smart, caring young man with a hefty intellect and a spirit not yet hardened to the vicissitudes of dumbassery. I hope that he doesn’t have to develop that thick, thick skin that is often needed in order to survive. He’s a better person for not having it.

And by the way — you really should buy his album, All-American Boy, if you haven’t already. It’s terrific.

I love to see this kind of thing. So different from the experiences of my generation of ancients. When I was working one of my first radio jobs — back, you know, when KDKA first signed on — I lobbied for, and finally received a portable cassette recorder so that I could do on-the-spot interviews and live-to-tape coverage of events. Thought I had died and gone to Heaven!

Oh, how the world has changed in 25-ish years! You go, Steve Grand! Here’s Grand’s new song, released to kick off his Kickstarter.

Aaron Hicklin on Steve Grand: His success as an out gay musician couldn’t have existed decade ago | Out Magazine.

There’s something infectious about hanging out with someone whose life is on the brink of change. Grand was like a boy who’d won the golden ticket — well-behaved and gracious, and enjoying every minute. It was one of his first public performances, and the fact that it was in an opulent Chicago institution that’s received every president since Harry Truman spoke volumes about where America finds itself in this particular moment.

Out magazine’s Aaron Hicklin chatting with Steve Grand in Chicago. |Image: Out magazine.

Technology, says Out’s Aaron Hicklin, that’s what we’ve got to thank for Steve Grand and for the plethora of entertainment options from across the spectrum that are now available to us thanks to the Innerwebs.

It’s a lovely article. Read it.

Also, search around for Hicklin’s Q&A with Grand from that event. I’ve seen it, but I can’t recall where. Towleroad, maybe? Anyhow, it’s a nice interview. The cut above has a video embed of Grand playing his debut, All-American Boy, at the Hilton.

Below is a link to a recent piece I did, featuring a video embed of his latest, Stay.

You can download the song at Bandcamp and set your own price. I think it’s a nice follow-up to “All-American Boy” but it’s always hard to get momentum on a sophomore release, so if you like this guy, you really should throw a couple of bucks his way. I think he’s well on his way to proving that out talent and indie talent are going to be essential components of our new entertainment mix. In case you haven’t seen the video for the song, I’ve embedded the YouTube link below. Enjoy.

Grand seems a genuine good sort and after a lot of the stuff he’s been through, it shows two things: the resiliency of the human spirit and that karma’s a real bitch!

Here are a few links:

Steve’s Bandcamp Page (donate a buck or more and download the song).