Out actor Chad Allen has decided to leave “the business” behind. Allen has been acting professionally for about 35 of his 40 years and now he wants to try something new.

He’s been working as a clinical psychologist of late and is pursuing his doctorate. This really shouldn’t come as any surprise: Allen has long been a passionate advocate for equality, for HIV/AIDS treatment and prevention and helping LGBT kids. By all accounts, he’s a modest sort and all in all a good egg. 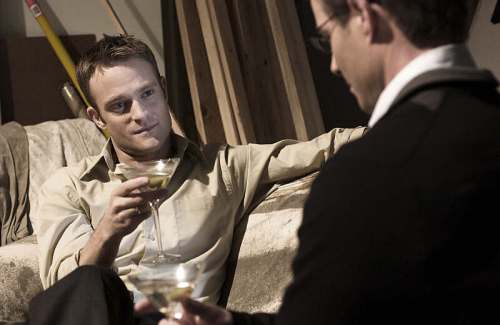 I have to say, I think my favorite of his many roles was his portrayal of gay private detective Donald Strachey in four made-for-TV movies that aired originally on the Here network. Based on a series of books written by Richard Stevenson, Strachey is something of a pioneer: one of the first — if not the first — out, gay lead character in detective fiction. They are quite good books and Stevenson’s pairing of Strachey with former seminarian Timmy Cunningham is the gold standard by which all other gay couples in genre fiction are judged against.

As Strachey, Allen’s easy-going demeanor was in evidence. He played the character with nonchalance and intelligence and, with Timmy, genuine love and affection mixed with that shot of exasperation that comes when you have been with someone for a very long time. H/T to director Ron Oliver, who helmed this quartet of films, as well.

One grace note, on five episodes of the daytime drama spin-off, General Hospital: Night Shift, Allen played a gay man dying of some mystery illness (I forget what) who falls for his doctor, played by Adam Grimes, who sends him away to find a new liver or some such, so that they could live happily ever after. Or something like that.

Anyhow, most of Allen’s lines were delivered from his hospital bed, but it was a heartfelt performance and, frankly, that was in 2008, and I still remember it.

Good luck and godspeed, Chad Allen. Thanks for sharing your gifts with us.

—–
P.S. — Do you remember the great series St. Elsewhere? Remember how at the end of its run, Tommy Westphall, the autistic son of the hospital’s director of medicine, was playing with a St. Eligius Hospital snow globe? And it seemed as though the entire series may have all been in his head? That was Chad Allen.