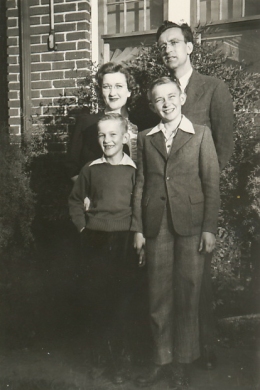 Dad, right front, with his younger brother and parents, about 1942.

We memorialize significant events with numbers ending in five or zero. The 30th anniversary. The 15th birthday. The 40th year of service. Not a 23rd birthday or a 7th anniversary or an 8th year.

This year, we mark 50 years since The Beatles released Sgt. Pepper’s Lonely Hearts Club Band and a half-century since Thurgood Marshall was confirmed to the Supreme Court, but we probably won’t pay much attention to the 33rd anniversary of the death of Marvin Gaye or the 186th birthday of “Lemonade Lucy” Hayes, U.S. first lady and wife of President Rutherford B.

On June 6, if it is a slow news day, some commentator will note in a 15-second piece that it’s the 73rd anniversary of the invasion of Normandy by the Allied troops in World War II, an event commonly referred to as D-Day, even though there are, militarily speaking, lots of D-Days. This D-Day is the one we remember.

I remember D-Day because twenty years ago on June 6, 1997, I got a frantic long-distance phone call from my sister telling me that our father had died.

This was not something I was expecting. He was 67 years old. The doctor had just given him a physical and pronounced him in perfect health. I had a long conversation with him on my birthday just 10 days prior where he described in detail the painting he had just completed for me. He was planning a trip to a reunion of sailors from the ship he served on in the Korean War. He told me a story about taking my four-year-old nephew Colin to the soda fountain at the drug store. I told him about the show that we had just extended at the theatre where I was working. He thought it sounded like fun. He wished me happy birthday and told me he loved me. I said thanks and that I loved him, too.

I never spoke to him again.

I’ve thought about him on every single one of the 7,300 days that have made up those two decades. I wasn’t ready to have my father die when I was barely in my 30s. I still had too many questions to ask. I still had too many hours to while away listening to stories of his childhood. I still had so many experiences that I would want to tell him about.

I wanted him to share in my successes. I wanted him to tell me that whatever may have failed or whatever terrible experience I might have had wasn’t the end of the world. I wanted to talk politics with him. I wanted to watch him get frustrated at building something once more because that was the best. He was a funny man, but he was at his funniest when he was cursing at an inanimate object that wouldn’t bend to his will.

I wanted him to paint me more paintings and make me more goofy birthday cards and take photographs of random things and mail them to me with a little note because he thought I would like to see them. Most of all, I wanted to introduce him to the man I fell in love with and married. 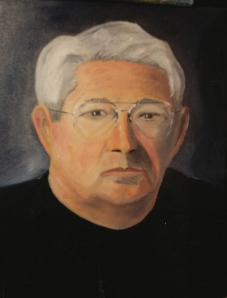 I suppose I came into my own as a human being after he died. I didn’t have a choice, really. I had to figure a lot out on my own. I wasn’t too thrilled by that, I have to say. Still, a few years later, I met Lee and after falling in love with him, I had the opportunity to fall in love with his parents, too, so I promptly did that, because I could. And because I got lucky. And because you rarely get a second chance at great parents. And you should never discount the value of luck.

My dad, like all of us, had lots of flaws. Often we tend to look at the dead through rose-colored spectacles, but I try not to do that. He was far from perfect. He made choices that I never would have made. He sometimes did things that left me scratching my head in bafflement. I’ve often wondered how I could be so different from him in so many ways. And I wondered how we could also share so many interests.

The only thing I do know, 20 years on, is that he loved me and I still love him. And that’s about the best gift a parent can give a child.

Here’s to D-Day, Daddy. Wish you were here.