“If you are a romantic lead, there is a perception — I don’t know if it is true or not — that you will no longer be cast as straight people,” [Jason Isaacs] told the Telegraph. “Even when casting gay roles, there is a tendency to cast straight people, so they are lauded for their transformation. It’s ridiculous. The notion that a gay actor can’t seem like they are in love with a woman on screen is so patently absurd I can’t believe it still exists.”

I couldn’t agree more. Of course, I looked at the photo and went, “Who in the hell is Jason Isaacs in Harry Potter?” That’s because Jason Isaacs is this guy: 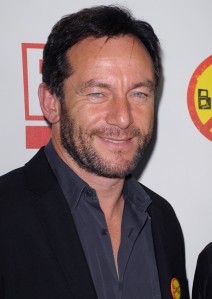 Astonishing what a little slap and a blonde wig’ll do for ya!