With all due respect to George Takei, whom we can all agree is awesome, I think the revelation that Hikaru Sulu is gay in the soon-to-be-released film Star Trek: Beyond is a fine thing.

Screenwriter and Scotty portrayer Simon Pegg says that it was done as an homage to Takei, who is openly gay, but Takei says he’s disappointed in the choice to take a character who has always been straight and suddenly make him gay 50 years after he was introduced in the original series. He says it’s against the vision of creator George Roddenberry.

Takei may have something there; after all, no one involved in the film reboot of the original series has had the benefit of knowing and working with Roddenberry. That said, I think if Roddenberry were alive today, he may well have approved. 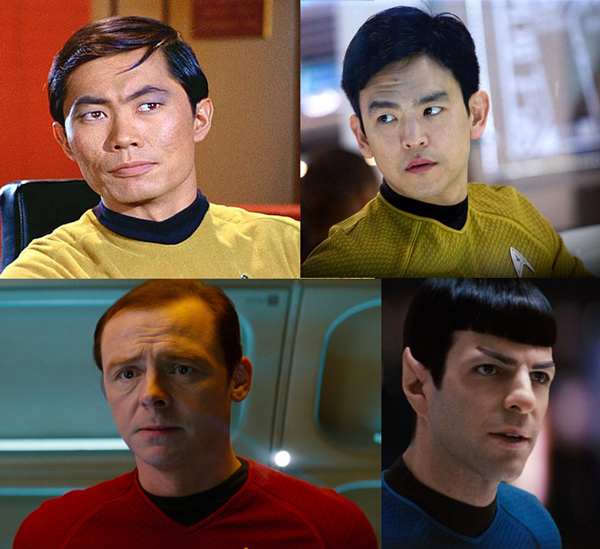 (clockwise from top left) George Takei as Hikaru Sulu in Star Trek, the original television series, John Cho as Sulu in the latest Star Trek motion picture series, Zachary Quinto as the latest Spock, and Simon Pegg as Montgomery Scott, the chief engineer on the starship Enterprise. Pegg also wrote the screenplay for the latest film.

Zachary Quinto, who portrays Spock in the franchise had this to say, as reported on Towleroad:

I was disappointed by the fact that George was disappointed. Any member of the LGBT community that takes issue with the normalized and positive portrayal of members of our community in Hollywood and in mainstream blockbuster cinema…I get it that he has had his own personal journey and has his own personal relationship with this character but, you know, as we established in the first ‘Star Trek’ film in 2009, we’ve created an alternate universe, and my hope is that eventually George can be strengthened by the enormously positive response from especially young people who are heartened by and inspired by this really tasteful and beautiful portrayal of something that I think is gaining acceptance and inclusion in our societies across the world, and should be.

He’s right, it is unfortunate, it’s unfortunate that the screen version of the most inclusive, tolerant universe in science fiction hasn’t featured an LGBT character until now. We could have introduced a new gay character, but he or she would have been primarily defined by their sexuality, seen as the ‘gay character’, rather than simply for who they are, and isn’t that tokenism?

Justin Lin, Doug Jung and I loved the idea of it being someone we already knew because the audience have a pre-existing opinion of that character as a human being, unaffected by any prejudice. Their sexual orientation is just one of many personal aspects, not the defining characteristic. Also, the audience would infer that there has been an LGBT presence in the Trek Universe from the beginning (at least in the Kelvin timeline), that a gay hero isn’t something new or strange. It’s also important to note that at no point do we suggest that our Sulu was ever closeted, why would he need to be? It just hasn’t come up before.

The viewing audience weren’t open minded enough at the time and it must have forced Roddenberry to modulate his innovation. His mantra was always ‘infinite diversity in infinite combinations’. If he could have explored Sulu’s sexuality with George, he no doubt would have. Roddenberry was a visionary and a pioneer but we choose our battles carefully.

And he ended the interview with a sentiment that, I believe, we can all agree with:

Whatever dimension we inhabit, we all just want to be loved by those we love (and I love George Takei). I can’t speak for every reality but that must surely true of this one. Live long and prosper.

For Trek geeks, I think the point that the TOS (the original series) timeline and the Kelvin (movie reboot) timelines are different and therefore the canon is different. For folks pushing for inclusion, I can’t imagine a better universe to do that in than Star Trek. Except, perhaps, for our own.