This is a terrific quote by gay icon and social media zeitmeister George Takei. This jump takes you to the Backlot, but it’s source is really the Huffington Post.

Takei on Star Trek: TOS, before he charted a course for icon staus.

“Some of the cast and creatives were aware that I was gay, and I did, on occasion, bring a male date to parties. Star Trek creator Gene Roddenberry was aware of my sexual orientation and very supportive. That was the extraordinary thing about Star Trek. That we were a diverse crew of people representing so many colors, backgrounds and heritages. That was the promise of the future. And, now, in the J.J. Abrams reboot, an openly gay actor is playing a Vulcan in love with an African American. I’m not really surprised by this. Star Trek taught us to look ahead to a time where Dr. Martin Luther King, Jr.‘s dream was fulfilled. Being a part of that vision was — and has remained — a tremendous honor.”

And, ultimately, that’s why I’ve always loved Star Trek. The deep understanding of humanity that Roddenberry infused the series with was so important in effecting change in our culture over time. It’s place in the cultural landscape of the Western world cannot be ignored — even if you don’t give a crap about stories of space cowboys and turtle-headed aliens.

(And we won’t even get into the stories about the ST geeks who developed flip-phone and Bluetooth earpieces because they designed them to look like tricorders and Uhura’s audio receiver. [“Captain, I’m receiving a subspace transmission from the Vulcan High Command. It’s a distress call!”]) 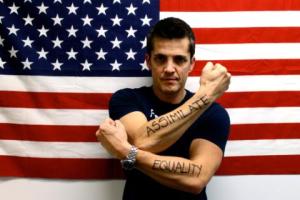 Great photo of Del Arco, which prompts a remembrance of his iconic role as Hugh the Borg on ST:TNG and the fight for equality. (Seriously, if you don’t know what I’m taking about, just find the damn episode!)

All Trek fans have their personal favorite series. Mine was Star Trek: The Next Generation (TNG). It was clunky and, frankly, downright bad for the first couple of seasons, but then it got extremely good.  My favorite TNG episode of all time was one called, “I, Borg” (here’s a clip) about a Borg becoming it’s own entity (you have to know what the Borg are, but go with it). It was a breathtaking, beautiful story about the importance of being different, of standing apart from the collective, of saying that there is difference and there should be acceptance. 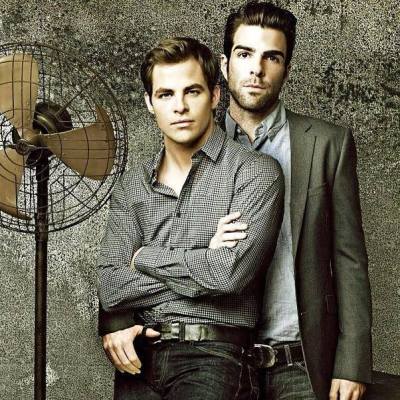 Chris Pine and Zachary Quinto. Their “deep space bromance” is chronicled in OUT magazine. There is obviously a high hotness score required to get into Starfleet Academy these days!

The singular Borg was played by a marvelous actor named Jonathan Del Arco. He’s an out gay man who is a passionate LGBT activist as well as an actor. Catch him on TNT’s terrific Major Crimes as Dr. Morales.

That’s a long way around the track to get to the point, which is shown so beautifully in the photograph at right. We have gone through so much to get to a world here today’s Capt. Kirk and Mr. Spock look like this. Their on-and-off-screen “bromance” is chronicled in a great article in OUT magazine.  In the article, Zachary Quinto talks about how intelligent Chris Pine is and how he infuses all of his characterizations with that intelligence. And, ultimately, that’s why I think Pine’s so damn sexy. I mean, the abs are nothing to sneeze at, but ya gotta have a brain! Oh, myyy, indeed!