Billy Magnussen brilliantly played the dim Spike in a Tony-nominated turn on Broadway earlier this year. He played Signourney Weaver’s love interest. Some gals have all the luck! | Image: broadwayworld.com

Good in-depth interview by Pat Cerasaro on Broadway World with Billy Magnussen. He’s one of my favorite interview subjects of late because he comes across as completely genuine — and more than a little bit quirky.

He’s shooting the new Into The Woods movie right now and he’s hot off his Tony-nominated turn in Vanya and Sonia and Masha and Spike, Christopher Durang’s exceptional play and one of the funniest afternoons I’ve ever spent at the theatre.

Magnussen is certainly easy on the eyes — just as he was back in the day when he played Casey Hughes on As The World Turns where I first ran across him — but he’s more than just another pretty face. His band is damn good, too. Here’s a link to the iTunes pages for Reserved For Rondee.

Damon Intrabartolo, composer of the hit off-Broadway musical Bare and a variety of film scores, died on August 13 in Phoenix, AZ. No cause of death has been reported. Intrabartolo was 39 years old. 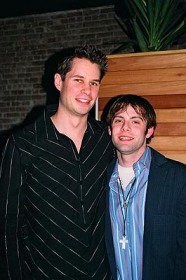 Jon Hartmere, Jr. (l), and Intrabartolo at an opening of “Bare.” |Image via broadwayworld.com

Intrabartolo wrote Bare, a musical about two gay Catholic school students grappling with their forbidden relationship, with co-book writer and lyricist Jon Hartmere. The musical originally premiered at the Hudson Theater in Los Angeles, CA, on October 14, 2000. It ran through February 25, 2001, before transferring to the American Theatre of Actors in New York City in the spring of 2004. A new, revamped version of the musical premiered at off-Broadway’s New World Stages on December 9, 2012, where it played through February 3, 2013.

In addition to Bare, Intrabartolo composed the musicals Plop andOdyssey of the Bulimic Orphans. He was in the process of composing a new musical called Ride… a pop fable before his death.

I must say, I was quite shocked by this news. I discovered him, like so many others, through the marvel that is Bare. I was so captivated by the original score that when Stafford Arima and Jon Hartmere reimagined it late last year Off-Broadway, I jumped at the chance to see it. Sadly, I did not like it very much, but was still glad that I got to be a part of it. A new production of Intrabartolo’s original concept is set to open next week in Los Angeles.