NBC’s “The New Normal,” a gaycentric series the network chose not to renew.

Although most people associate the month of May with the Kentucky Derby, Memorial Day weekend traffic or beautiful spring bouquets for Mom, television has only one thing on its mind: Out with the old and in with the new. Manhattan is awash with TV folks in town for the upfronts, the annual ritual in which the networks present their fall schedules to advertisers in hopes of wooing big bucks. It is too early to tell which network will be the big winner, but this year there is a clear loser: gay characters. 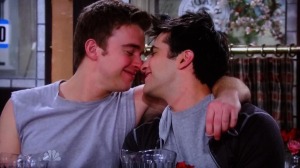 Will Horton (Chandler Massey) and Sonny Kiriakis (Freddie Smith) on “Days of our Lives,” one of the few gay couples on American television.

Sadly, Hartley tells it for the truth, but I’m not sure he actually goes far enough in his hue and cry against the broadcast networks.

Last year there was a lot of positive buzz about the numbers of gay characters on the networks. The sum total of gay characters was about 6% of all characters — lame — but it was the highest percentage ever. After wiping us off the map for all intents and purposes in primetime, in daytime it’s not much better. There seems only to be  Sonny and Will’s  front burner storyline on “Days of our Lives,” amongst the sordid lives being lived on the few remaining televised soaps. Other than that, gay characters on traditional American television are few and far between. (Eden Reigel’s Bianca stands alone — as a proud but lonely lesbian in the gay landscape of Pine Valley on the Web reboot of “All My Children.” It will be nice if that changes.)

Moving away from traditional TV to find entertainment, I would encourage you to check out these great Web series: EastSiders, The Outs, Husbands, and others. If you go to Logo to check out EastSiders (highly recommended), explore some of their other Web only offerings, such as Hunting Season.