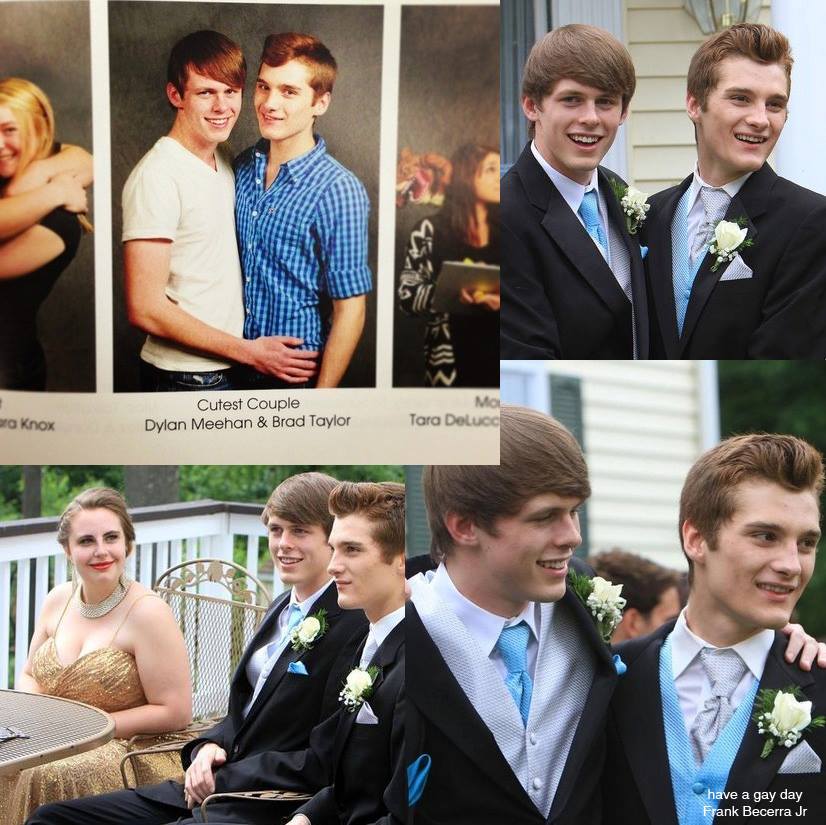 Carmel High School students Bradley Taylor and Dylan Meehan hold hands as they discuss the whirlwind of publicity they have received these past few days.

Just hours away from their senior prom Monday, Taylor and Meehan donned tuxedos with coordinating blue and silver vests and ties, living up to their newfound class designation. Last week, the two were named “cutest couple” in their yearbook’s senior superlatives, sparking international attention for the gay teens.

I love the idea that these kids don’t see anything abnormal about a same sex couple being voted “Cutest Couple” in their senior superlatives. I, on the other hand, find it breathtaking and utterly astounding. And also as evidence that these young people will be more capable leaders of the world than my generation — and most assuredly more capable than the generation or two that came before me.

The great video that accompanies this story shows Dylan and Brad and their friends getting ready for their senior prom in Carmel, New York, north of New York City.

My high school prom was held in 1982. If I would have said I was attracted to a yak and wanted to bring a yak to the prom and let it crap on the dance floor, it would have caused less stir than if I said that I wanted to bring another boy. It just wasn’t done. Not only that, no one — certainly no one that I knew — ever even thought about it.

I cannot even imagine the world that these young people live in, but I am ecstatic that it exists for them. I hope it exists for everyone soon.

Remember this: no old person ever changed the world. Let’s make way for our young people; they know better than we do. That’s how change happens.

(Also, every now and then it pays to know your history. Written by John Lennon and released by The Beatles in 1967 was an anthem with the following line: All you need is love, Love. Love is all you need. Truer words were never spoken [well, sung]. Note that there’s no gender inferred or implied. Love is love, Love.)