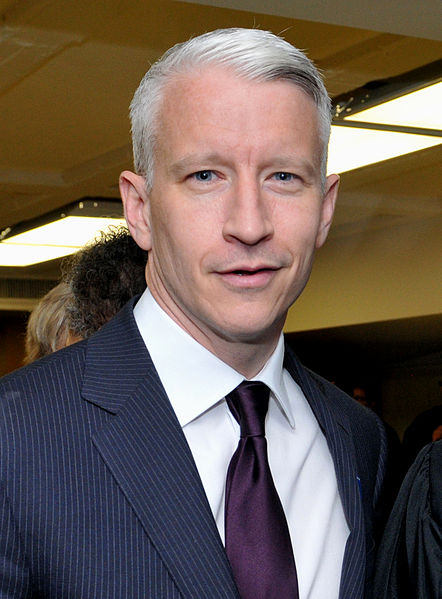 CNN silver fox Anderson Cooper at Tulane University recently. Cooper is called a “CNN cyborg” by the group Cryptic Murmurs. I can’t contemplate that as I’m too busy being mesmerized by his dreamy eyes!
Image: Wikimedia Commons

CNN anchor Anderson Cooper has inspired what he calls “a soulful ballad,” a heavy metal song by the Cryptic Murmurs. The song, appropriately titled “Anderson Cooper,” includes the lyrics: “usually has a stern look on his face / stands in the middle of hurricanes” and “has never lost his composure … ever … not even once.”

You really should watch the video clip of Cooper talking about the heavy metal song named after him. There’s no reason Cooper has to have a sense of humor about himself and his reputation, but the fact that he does makes me like him even more!

I ❤️ my #nylabone! #hazel #bassethound #bassethoundsofinstagram #dogsofsyracuse
#tbt From the Waaaaayback Machine. Radio Daze. And LOTS of dark hair! Ahh, #youth! #1980s #radio #microphone #albums #vinyl #nogreyhair
Today would have been my dad’s 90th birthday - and my grandmother’s 113th. Here are a few snaps of them together and apart. That birthday bond made them particularly close, I suppose; he only outlived her by a year. It’s nearly a quarter-century since they’ve been gone but I think of them both all the time. The first photo is one of my favorites - Dad at work at his drafting table getting ready to create something. It is how I remember him.
You have to admit it’s pretty — even if it is 8 degrees. #winter #cold #cny #backyard #snow #ice
What he said.
#snow is too deep and my legs are too short. Gonna sleep like this all day. #bassetlife #bassethound #bassethoundsofinstagram #winter #hazel