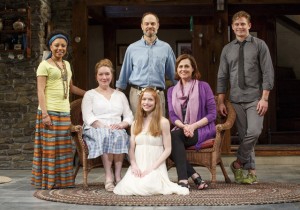 Lucky me. I was in New York last week and had a chance to see Christopher Durang’s brilliant Vanya and Sonia and Masha and Spike at the Golden Theatre.

When we arrived and settled into our seats, the usher turned to us and said, “You’re going to laugh.”

Kristine Nielsen, David Hyde Pierce, the divine Shalita Grant and the hilarious Billy Magnussen all received Tony Award nominations for their performances today. They were all richly deserved — hell, I thought someone should have delivered a Tony to Ms. Grant after the performance I saw, she was so good — but I am puzzled by the Tonys snub (and it’s completely a snub) of Sigourney Weaver who, as Masha, delivers what may be my all time favorite line in the history of theatre in this play.

I just posted a bit about Jake Silbermann who is in a Tony nominated show on Broadway right now as well. Billy Magnussen — Spike — was one of Silbermann’s co-stars on As The World Turns. Let no one tell you great actors don’t come from soaps.

If you have a chance, see VSMS!

Billy Magnussen, Best Featured Actor in a Play, Vanya and Sonia and Masha and Spike:

“Ahhhh, my dog is eating this thing. I have two dogs. I have a French bulldog named Kiki Something Awesome Ninja Meatball. The other one is a long-haired miniature dachshund named Tank. I was in bed when I found out I was nominated for a Tony. I don’t have a publicist. I found out when my mom called this morning. I was sleeping. You know when your phone rings and you just keep yelling at your phone because you just want to sleep? That’s what I was doing. I didn’t know they were calling about that. After the fifth time, I was like, ‘fiiiiine…she has something to talk to me about.’ Crazy, right? I’m going to go to the gym right now. I have to run every day, because I gain weight fast.”