What follows is the text of an e-mail. I have friends — curiously, a great many really good friends — whip smart people — who work in and are passionate about the world of opera. To butcher Austin Powers, opera ain’t my bag, baby, but I appreciate it as an artistic expression. My particular tastes never get in the way of making sure that others can tell a story and impact lives by doing so.

Anyhow, this is in response to the whole hub-bub that’s happening at San Diego Opera. You can read a primer in this article from the LA Times. Meanwhile, all outrage and expletives below are my own.

—–
*sigh* JESUS FREAKIN’ CHRIST
I will attempt brevity, but I probably will not succeed because this pushes all of my arts management buttons. 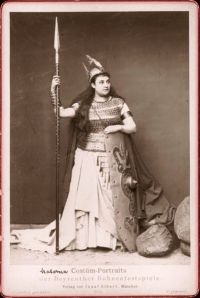 It’s not over, you know, until the fat lady sings. Here’s Amalie Materna as Brunhilde in Wagner’s Der Ring des Nibelungen nearly 140 years ago. People are still coming to hear this music. Should we preserve it?

Here’s the bottom line: this is 100% — ONE HUNDRED PERCENT — about the mis-, mal- and non-feasance of this Board. Period. End of. Do not pass “Go.” Accept and move on to the next task. Because….

When an arts Board forgets that they are supposed to make ART happen instead of make MONEY happen, well, they’ve lost the plot already.

So, what happens now? If no one pulls their fat out of the fire? Lots of people who can ill afford it lose their jobs. San Diego loses one of California’s/America’s/the world’s cultural treasures. And an art form dies a little. And we’re all a little bit worse off because we’ve contracted the amount of space in our world that we are willing to allot to art. And, thus, we become less and less human. That’s the esoteric nth degree, but it makes it no less sad.

This, friends, is the sad intersection of art and commerce where, unless you are the deftest of traffic cops, commerce always runs roughshod over art.

And I find the greatest of ironies in [redacted – the signature file of the original sender]: Audiences Reimagined? Okay. Good luck with that. But, I will leave you with this tiny tip: that’s a false construct. Audiences are audiences. They do not change. If you want to reimagine something WORTHWHILE THAT CAN BENEFIT SOMEONE, reimagine MARKETING to the audience. And Boards.

This fuckin’ thing raised my blood pressure too high for 10pm on a Tuesday.